Growing through the years 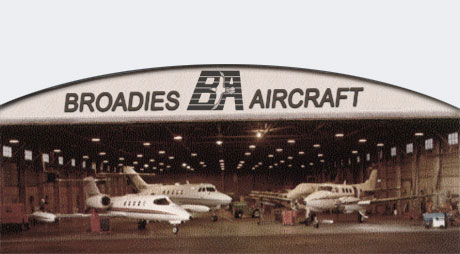 Times may change, aircraft may change, but the commitment to excellence for our customers has been unchanging since our doors first opened in 1946.

We are proud to be such a recognized and respected name here at Meacham International Airport (KFTW) in Fort Worth, Texas and in the aircraft service industry throughout the southwest.

Won’t you join us for a fast stroll down memory lane?

Founded by D.W. Broadie, we opened our doors with a vow of outstanding service at a reasonable price. We started our company working out of a Quonset hut.

D.W. made sure that Broadie’s Aircraft was always capable of handling the top aircraft of the day, and we quickly built a reputation for fast reliability and integrity.

Broadie’s Aircraft was growing and we moved into Hangar 2N at KFTW, a 28,000 square foot World War II hangar. We love that our own history is tied to the history of our great country.

Broadie’s Aircraft: Growing Through The Years

We expanded the hangar and the business, now being run by the second generation of Broadies, who all had the same commitment to quality service and overall excellence firmly established by D.W. over 30 years earlier.

The hangar was updated again, but this time we had an eye on something bigger, and began early planning for an entirely new hangar and customer facility to open on a five-year plan.

We moved into hangar 44N, a 64,000 square foot facility at the north end of Meacham International Airport with state of the art features and capabilities, including:

Aircraft Models Through The Years:

Broadie’s Aircraft was built on the principal that we would offer the best-trained, most experienced team to service the top aircraft of the day.

We’ve seen a lot of days, and a lot of aircraft changes! Through it all, we’ve stayed true to that core value of offering the best service available. Period.

The “old days” – recognize these names?

Transitioning into the Jet Age: